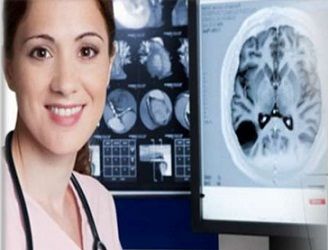 Gamma Knife Radiosurgery, also called stereotactic radiosurgery, is a very precise form of therapeutic radiology. Even though it is called surgery, a Gamma Knife procedure does not involve actual surgery, nor is the Gamma Knife really a knife at all. It uses beams of highly-focused gamma rays to treat small to medium size lesions, usually in the brain. Many beams of gamma radiation join to focus on the lesion under treatment, providing a very intense dose of radiation without a surgical incision or opening.

Gamma Knife radiosurgery is called “surgery” because a result similar to an actual surgical procedure is created by a one-session radiation therapy treatment. The beams of radiation are very precisely focused to reach the tumor, lesion, or other area being treated with minimal effect on surrounding healthy tissue.

Gamma Knife radiosurgery is most often used to treat tumors and other lesions in the brain. It is also used to treat certain neurological conditions, such as trigeminal neuralgia (a condition in which pressure on the trigeminal nerve causes spasms of extreme facial pain) and acoustic neuroma (a noncancerous tumor in the brain that affects the nerves that control hearing).

Gamma Knife radiosurgery may be used in situations where the brain lesion cannot be reached by conventional surgical techniques. It may also be used in persons whose condition is such that they might not be able to tolerate a surgical procedure, such as craniotomy, to treat their condition. Because the therapeutic effects of a Gamma Knife procedure occur rather slowly over time, it is not used for persons whose condition requires more immediate therapy. Through the use of three-dimensional, computer-aided planning and the high degree of immobilization of the patient, the treatment can minimize the amount of radiation to surrounding healthy brain tissue. There are approximately 200 sources of cobalt-60 loaded within the treatment unit. Thousands of radiation beams can be generated from these sources with a level of accuracy of more than 0.5mm, about the thickness of a strand of hair. Individually, each radiation beam is too weak to damage the normal tissues it crosses on the way to the target. But when focused precisely on that target, the beams intersect and the combined radiation is sufficient to treat the targeted area.

Because Gamma Knife radiosurgery is so accurate, the full dose of radiation can be delivered during a single session, compared with multiple visits for linear accelerator (linac) treatments, which use lower doses delivered in fractions (fractionated treatment).

Stereotactic refers to precise positioning in three-dimensional space. In Gamma Knife surgery, this means a 3-D reference frame is attached to the patient’s head during the procedure. The stereotactic frame provides a 3-D reference which can be seen on the imaging equipment to provide exact coordinates for the target and totally immobilizes the patient’s head to ensure pinpoint accuracy.

Rather than dose-contributing CT scans, most neurosurgeons use a single MRI imaging scan to establish the treatment target for Gamma Knife surgery. Other linac-based systems that don’t use the head frame require constant imaging with CT scans during treatment, further contributing to excess dosage.

Why Gamma Knife Radiosurgery is done?

Gamma Knife radiosurgery is often an appropriate alternative to standard brain surgery (neurosurgery), which requires incisions in the skull, membranes surrounding the brain and brain tissue. This type of radiation treatment is usually performed when:

Gamma Knife radiosurgery is most commonly used to treat the following conditions: