Lung Cancer Treatment at at World Class Hospitals in India 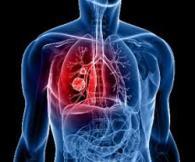 Since lung cancer tends to spread or metastasize very early in its course, it is a very life-threatening cancer and one of the most difficult cancers to treat. While lung cancer can spread to any organ in the body, certain organs – particularly the adrenal glands, liver, brain, and bone – are the most common sites for lung-cancer metastasis.

The lung is also a very common site for metastasis from tumors in other parts of the body. Tumor metastases are made up of the same type of cells as the original, or primary, tumor. For example, if prostate cancer spreads via the bloodstream to the lungs, it is metastatic prostate cancer in the lung and is not lung cancer.

The most common methods are surgical removal of the cancer, chemotherapy, or radiation therapy, as well as combinations of these treatments depending on the localization and extent of the tumor as well as the overall health status of the patient.

Surgery: Surgery is the oldest known treatment for cancer. If a cancer is in stage I or II and has not metastasized, it is possible to completely cure a patient by surgically removing the tumor and the nearby lymph nodes. After the disease has spread, however, it is nearly impossible to remove all of the cancer cells.

Lung cancer surgery is performed by a specially trained thoracic surgeon. After removing the tumor and the surrounding margin of tissue, the margin is further studied to see if cancer cells are present. If no cancer is found in the tissue surrounding the tumor, it is considered a “negative margin.” A “positive margin” may require the surgeon to remove more of the lung tissue.

The radiation is either delivered externally, by using a machine that directs radiation toward the cancer, or internally through placement of radioactive substances in sealed containers within the area of the body where the tumor is localized. Brachytherapy is a term used to describe the use of a small pellet of radioactive material placed directly into the cancer or into the airway next to the cancer. Chemotherapy : Both NSCLC and SCLC may be treated with chemotherapy. Chemotherapy refers to the administration of drugs that stop the growth of cancer cells by killing them or preventing them from dividing. Chemotherapy may be given alone, as an adjuvant to surgical therapy, or in combination with radiotherapy. Chemotherapy is the treatment of choice for most SCLC, since these tumors are generally widespread in the body when they are diagnosed. Only half of people who have SCLC survive for four months without chemotherapy. With chemotherapy, their survival time is increased up to four- to fivefold. Chemotherapy alone is not particularly effective in treating NSCLC, but when NSCLC have metastasized, it can prolong survival in many cases.

Photodynamic therapy (PDT): One newer therapy used for different types and stages of lung cancer (as well as some other cancers) is photodynamic therapy. In photodynamic treatment, a photosynthesizing agent (such as a porphyrin, a naturally occurring substance in the body) is injected into the bloodstream a few hours prior to surgery. During this time, the agent deposits itself selectively in rapidly growing cells such as cancer cells. A procedure then follows in which the physician applies a certain wavelength of light through a handheld wand directly to the site of the cancer and surrounding tissues.

Radiofrequency ablation (RFA): Radiofrequency ablation is being studied as an alternative to surgery, particularly in cases of early stage lung cancer. In this newer type of treatment, a needle is inserted through the skin into the cancer, usually under guidance by CT scanning. Radiofrequency (electrical) energy is then transmitted to the tip of the needle where it produces heat in the tissues, killing the cancerous tissue and closing small blood vessels that supply the cancer. RFA usually is not painful and has been approved by the U.S. Food and Drug Administration for the treatment of certain cancers including lung cancers. Studies have shown that this treatment can prolong survival similarly to surgery, when used to treat early stages of lung cancer, but without the risks of major surgery and the prolonged recovery time associated with major surgical procedures.

How To get Started ? Get a Free Expert Opinion from Top Lung Cancer Specialists in India ?