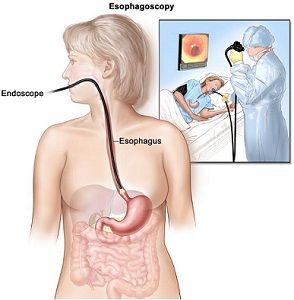 Barium Swallow or Upper Gastrointestinal (GI) X-rays : Barium in liquid form is used to coat the esophagus wall and then a digital x-ray is taken so that the condition of the esophagus can be clearly seen.

Upper Endoscopy for Esophageal Cancer : Endoscope is a flexible, very narrow tube with a video camera and light on the end. The patient is sedated to allow for this tube to pass through into the esophagus and stomach. The doctor can see on a compute monitor the abnormalities in the wall of the esophagus clearly.

Endoscopic Ultrasound for Esophageal Cancer : An endoscope with a small ultrasound probe attached to its sends very sensitive sound waves that penetrate deep into tissues. The sound waves bounce off the normal tissues images convey how deeply the tumor has invaded into the esophagus.

Bronchoscopy for Esophageal Cancer : The physician looks into the trachea (windpipe) and bronchi (tubes leading from the trachea to the lung).

Positron Emission Tomography (PET SCAN ) for Esophageal Cancer : In this test, the patient is administered radioactive isotope glucose and since the cancers use sugar much faster than normal tissues, the cancerous tissue takes up the radioactive material. A PET scanner can spot the radioactive deposits.

The stage of cancer is determined first of all by analysing the size of the tumour and the number and location of enlarged lymph nodes. Accurate staging helps tailor treatment to the patient’s specific needs. Staging can be done with CT scan, biopsy, esophageal ultrasound and PET scan. Surgery: Surgery is the removal of the tumor and some surrounding healthy tissue during an operation. A surgical oncologist is a doctor who specializes in treating cancer using surgery. Surgery has traditionally been the most common treatment for esophageal cancer. However, currently, surgery is used as the main treatment only for patients with early-stage esophageal cancer.

The most common surgery to treat esophageal cancer is called an esophagectomy, where the doctor removes the affected part of the esophagus and then connects the remaining healthy part of the esophagus to the stomach so that the patient can swallow normally. The stomach or part of the intestine may sometimes be used to make the connection. The surgeon also removes lymph nodes around the esophagus. Talk with your health care team about the possible side effects of this surgery and how they will be managed. Radiation Therapy : Radiation therapy is first deployed to shrink the tumor with carefully directed radiation at the tumor. This helps destroy or reduce the tumor, because cancer cells divide and grow faster than normal cells. Normal cells usually recover successfully from new age radiation like Linac, Gamma Knife, Novelis or Cyberknife. Radiation therapy is given as an outpatient for 5 minutes for 5 to 6 weeks. Re-staging : Approximately 4-6 weeks after your last treatments you will undergo several tests to determine the success of therapy. You may be required to undergo another set of tests like CT scan of the chest and upper abdomen and Upper endoscopy and esophageal ultrasound.

Surgical Resection : If you have had chemotherapy and radiation therapy, surgical resection of the esophagus will occur approximately 5-6 weeks after your last radiation treatment.

How To get Started ? Get a Free Expert Opinion from Top Esophageal Cancer Specialists in India ?