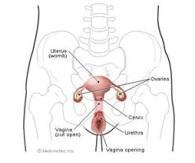 Uterine (Endometrial) cancer originates in the female reproductive system and genrally affects postmenopausal women between ages 50 and 60;. It develops in the body of the uterus or womb whose wall has an inner lining (called the endometrium) and an outer layer of muscle tissue (called the myometrium).

Endometrial cancer (Uterine Cancer) is often detected at an early stage because it frequently produces vaginal bleeding between menstrual periods or after menopause. If discovered early, this slow-growing cancer is likely to be confined to the uterus. Removing the uterus surgically (Hysterectomy) successfully eliminates Endometrial cancer if detected and carried out in the initial stages. A pelvic exam is performed by the doctors checking the vagina, uterus, ovaries, bladder, and rectum for Endometrial Cancer (Uterine Cancer). An instrument called a speculum is used to widen the vagina so the doctor can see the upper portion of the vagina and the cervix.

The Pap Smear test is often performed during a pelvic exam Endometrial Cancer (Uterine Cancer). The doctor uses a wooden scraper (spatula) or small brush to collect a sample of cells from the cervix and upper vagina. The cells are then sent to a medical laboratory to be checked for abnormal changes. Because uterine cancer begins inside the uterus, it may not show up on a Pap test, which examines cells from the cervix.

A biopsy may be needed for a definitive diagnosis where the doctor removes a sample of tissue from the uterine lining. In some cases, a woman may require a dilation and curettage (D&C), which is usually a day care procedure. During a D&C, the opening of the cervix is widened and the doctor scrapes tissue from the lining of the uterus. A pathologist examines the tissue to check for cancer cells, hyperplasia, or other conditions.

Surgery is the best option when Endometrial Cancer (Uterine Cancer) is diagnosed in its very early stages. At this time, the location and the stage of cancer make removal easy. Sometimes patients are treated with a combination of surgery and radiation therapy. Laparoscopy Assisted Vaginal Hysterectomy – involves the minimally invasive or open surgery to remove the uterus. If required teh surgeon may decide to remove both ovaries and the fallopian tubes if there is a risk of Endometrial cancer spread to the ovaries. In most cases, uterine cancer is an Adenocarcinoma that metastasizes late, usually from the endometrium to the cervix, ovaries, fallopian tubes, and other peritoneal structures. It may spread to distant organs, such as the lungs and the brain, through the blood or the lymphatic system. In such cases advanced tratement post Hystrectomy like Chemotherapy and Radiation are advised.

Involves modern cancer drugs that are administered intravenously or orally to kill cancer cells and to reduce the chances of the tumour returning elsewhere in the body.

India’s leading Cancer hospitals now have some of the world’s moset advanced radiation equipment like Linac, Novelis, Gamma Knife and Cyberknife for treating Colon rectal Cancers. High technology radiation is used to kill cancer cells without affecting the healthy tissues. Radiation may be used to reduce the tumor prior to surgery or to obviate the symptoms of colorectal cancer such as pain, bleeding, or blockage.